Showing posts from 2019
Show all

The sidewalk has reopened and pedestrian access has resumed on the northbound side of the North Arthur Ashe Boulevard Bridge between Leigh Street and Avenue of Champions.

A routine bridge inspection in November revealed an emergency repair was needed to fix one of the concrete piers that supports the northbound sidewalk.

The November inspection revealed no safety concerns on the traffic lanes or the southbound sidewalk.
## 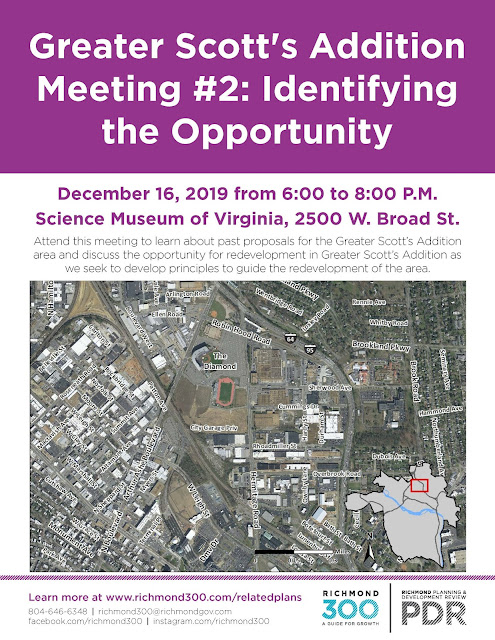 For those residents of Richmond who have not been able to attend one of Mayor Levar Stoney's four Navy Hill town hall meetings, video footage of the presentation and the accompanying Powerpoint have been made available.

Click here to watch the video of Mayor Stoney and Director of Economic Development Leonard Sledge giving the presentation.

Follow along with this link to the Powerpoint presentation.

By Office of the Press Secretary to the Mayor - November 08, 2019
The Richmond Redevelopment and Housing Authority recently issued a press release containing vital public information entitled, "RRHA to Freeze Evictions for Remainder of 2019." According to the release, for the remainder of 2019 no public housing resident will be removed from their unit due to debt owed to RRHA. RRHA has also committed to "an agency-wide evaluation of... public housing families' rental accounts and give tenants that are in arrears the opportunity to come current" as well as a re-evaluation of current rent collection policies. ALL SCHEDULED EVICTIONS ARE CANCELED. Please spread the word to affected persons. Per the release, public housing residents should contact Ralph Stuckey of RRHA at 804-780-4291 for next steps.
##
Read more

By Office of the Press Secretary to the Mayor - November 06, 2019
The applications for federal, city general fund, and Affordable Housing Trust Fund grants are currently available.

By Office of the Press Secretary to the Mayor - October 31, 2019
Significant improvements to several Public Works request types will be implemented in RVA311 on November 1. Changes will separate out some request types that were previously combined, resulting in three benefits:1.It will be easier to find the right request for your needs
2.Submissions will be more accurate
3.Requests will route to the appropriate internal team more efficiently Two other, similar request types will be combined for ease of use. In addition, descriptions of these requests have been completely rewritten to explain clearly to citizens what process they need to follow and what to expect when submitting a request. “Parking Application” has been separated into two distinct requests: "Request Handicap Parking Sign" and "Request Residential Parking Permit." Request routing has been improved.“Paid Services” Request has been redesigned into three distinct requests, tailored to each need to be easier to use for both citizens and Solid Waste staff: "Request Res…
Read more

By Office of the Press Secretary to the Mayor - September 30, 2019
After 34 years of making downtown Richmond shine, the time-honored tradition of Grand Illumination hosted by the James Center will now be operated by the City of Richmond. The Department of Parks, Recreation and Community Facilities (PRCF) will host Downtown Illumination RVA at Kanawha Plaza, 801 E. Canal Street, on Friday, December 6, 2019 beginning at 5:45 p.m.

Originally catered to the tenants, visitors, and their families of the Hames Center, this long-standing kick-off to the holiday season has annually attracted thousands to Downtown Richmond for family-friendly fun. The City of Richmond would like to thank the James Center for serving as the originators and the driving force behind this time-honored holiday tradition.

PRCF will have more details in the coming weeks.

By Office of the Press Secretary to the Mayor - August 23, 2019
As a primary recipient of Federal Funds HCD is required by federal mandate to post these draft documents for the public to view.

By Office of the Press Secretary to the Mayor - August 23, 2019
In 2018, the City of Richmond contracted with Homeward, the planning and coordinating agency for homeless services in the Greater Richmond area, to create a strategic plan for addressing homelessness in the city. Now, Homeward is soliciting input to create a plan that reflects the needs and interests of the community.
To voice your opinion, take this survey:https://www.psychdata.com/s.asp?SID=186859
The survey will be available through August 29, 2019.
For more information, visithomewardva.org.
##
Read more

By Office of the Press Secretary to the Mayor - July 19, 2019
The Lynhaven Avenue Bridge over Broad Rock Creek is shutting down immediately as the city prepares to replace the 70 year old structure.
Funding for the new bridge, estimated at $1.1 million, is in place effective July 1, 2019 and the project is expected to be advertised for construction bids this coming fall with work commencing in the winter. The replacement bridge is scheduled to open before the fall of next year.
The bridge has a posted weight limit of three tons due to some deterioration. However, the continued violations by large commercial vehicles prompted the closing. The impact to motorists will be minimal, as only approximately 520 vehicles cross the bridge daily. Traffic detours will be implemented near the location.
We’re Social! For updates on DPW-related projects, activities and events visit us on Twitter @DPW_RichmondVA.

By Office of the Press Secretary to the Mayor - July 18, 2019
Please click here to view or download the FY 2020 Consolidated Annual Action Plan

The Richmond Training Camp Ambassador program allows volunteers to be the “face” of Richmond. Program participants highlight local tourism destinations, restaurants and other points of interest in the city, answer questions about training camp and help make it a fun and safe event for all attendees.

There will be a few dates with only a single practice, resulting in only one volunteer shift.

All volunteers will receive the foll…
Read more

By Office of the Press Secretary to the Mayor - June 10, 2019
The following events celebrate aspects of African and African-American heritage during the summer months. All information for these events was provided by the Elegba Folklore Society. Learn more about the Elegba Folklore Society at http://efsinc.org/.
Juneteenth, A Freedom Celebration
Symposium, Friday, June 14 from 6 p.m. to 10 p.m. at Elegba Folklore Society, 101 E. Broad Street Independence Day Our Way, Saturday, June 15 from 3 p.m. to 7 p.m. at Manchester Dock Homage to Our Ancestors, Sunday, June 16 from 3 p.m. to 7 p.m.
Visit http://efsinc.org/events/festivals/juneteenth/ for more information.
Grand Opening of Determined: The 400-Year Struggle for Black Equality
Saturday, June 22 from 11 a.m. to 12 p.m. at the Virginia Museum of History and Culture Admission complimentary, RSVP requested
What is Africa to Me? Perspectives on History and Culture Community Study Group Wednesday, June 19 at Elegba Folklore Society
Out of Darkness, Showing and Conversation Part of the 3rd Saturday Documen…
Read more
More posts